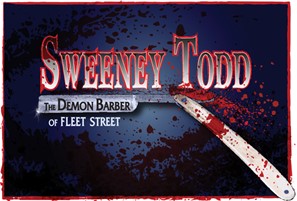 Music and Lyrics by Stephen Sondheim

From an adaptation by Christopher Bond

An infamous tale, Sweeney Todd, an unjustly exiled barber, returns to nineteenth century London, seeking vengeance against the lecherous judge who framed him and ravaged his young wife. The road to revenge leads Todd to Mrs. Lovett, a resourceful proprietress of a failing pie shop, above which, he opens a new barber practice. Mrs. Lovett’s luck sharply shifts when Todd’s thirst for blood inspires the integration of an ingredient into her meat pies that has the people of London lining up… and the carnage has only just begun!” MTI

About the Summer Independent Production Program

The Summer Independent program is a professionally mentored program unique to Village Theatre. Unlike most KIDSTAGE productions, the focus is on the production team instead of the actors. Students take on every aspect of production, from performing, directing, and stage management, to designing and building sets, creating costumes, running sound and lights, marketing, production management, and more. It the pinnacle experience for students who come with a background in live theatre, and it provides autonomy, resources, and mentorship to select, mount, and produce their own full-scale show from start to finish.