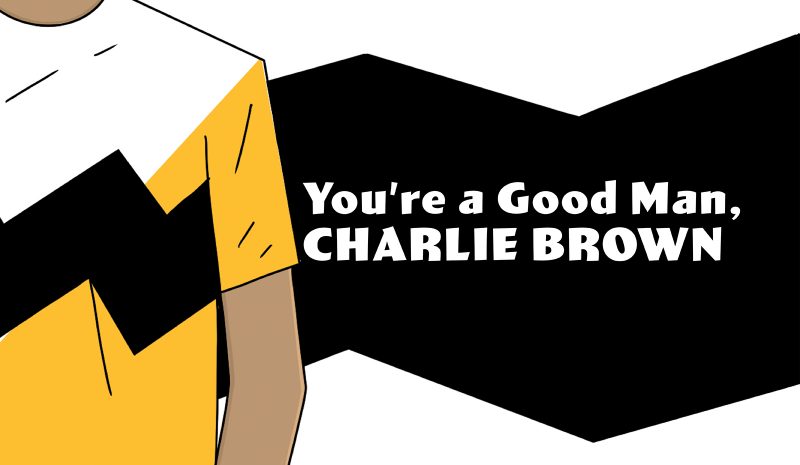 Learn More About the Show

Perfect for audiences ages 5+, You’re a Good Man, Charlie Brown is based on the beloved comic strip Peanuts by Charles M. Schulz.

Growing up is serious business! Explore a day in the life of Charlie Brown as he goes from wild optimism to utter despair in this delightful revue of songs and vignettes that will take you on a nostalgic trip to all things Peanuts. Join Linus, Lucy, Schroder, and the whole “Peanuts” gang as they bring us along in their journey to learning they learn how a great big dose of sunlight and positivity can be the best medicine. With charm, wit, and heart, this musical comedy will remind us all that the truth can hurt and sometimes it’s gut-bustingly funny! Directed by Jimmy Shields with Choreography by Cy Paolantonio and Music Direction by R.J. Tancioco.

A Note from the Director

As we forge ahead into a more aware and inclusive world, it was of the utmost importance to me for everyone to see a piece of themselves on this stage. Not just physically, but emotionally and yes, even mentally. What better production to take on this task than You’re a Good Man Charlie Brown?

At first glance, we often recognize Charlie Brown and the gang as simply the iconic Peanuts comic strip and shorts we know and love. In a deeper look, we realized that these kids are parts of all of us (intentional on Charles Shulz part) on the cusp of discovering how the world works and how do we find and navigate our happiness though it. The characters have a way of acknowledging their shortcomings by asking introspective questions, usually prompted by their peers, but never losing that true sense of self.

I hope this production allows you to reconnect with that childlike optimism and steadfastness that was there before your happiness was influenced by the outside world.  May it remind you of dreams that may have taken a back seat to responsibilities. May it stir up the gumption to ask, “Why?” and not just accept what’s given. Even through some trying times Charlie and friends are able to find small pockets of joy, leading us to a better understanding of what happiness truly is or can be.

Please allow every element of this show to spark a continued practice of finding your happiness. Find it as often as possible. It can be as simple as flying a kite, singing a song, or just watching the stars. Whatever it is, make it a priority. We sometimes forget to do that as we grow in age but having Charlie, Sally, Lucy, Linus, Schroeder and Snoopy around sure is a great reminder!

A Note from the Dramaturg

When the musical, You’re A Good Man, Charlie Brown opened Off-Broadway in 1967, the artists involved were already in the challenging position of portraying American icons. The Peanuts comic strip was a daily feature in newspapers across the United States. There were published books and TV specials, not to mention a myriad of Peanuts toys and other merchandising.

Since the 1960’s the Peanuts world has only grown; more comics, more characters, more books, games, toys, TV shows, and movies. As storytellers in 2022, the artistic team at Village Theatre was conscious of stepping into this ever-expanding Peanuts legacy—and we faced the exact same question as the original musical production, “How do you portray American icons?”

Now, that’s a very interesting question. There’s an assumption that iconic characters will be both recognizable and representative. There’s a lot of diversity to be found in the U.S., but, historically, there has not been a lot of diversity represented in the Peanuts comic strips. Charles Schulz told stories and created characters that were based on his childhood as a young white boy growing up St. Paul, Minnesota. They are wonderful stories and beloved characters, but it’s impossible for a single mind to portray the diversity of the American experience—by definition a single world view is not diverse.

The beautiful thing about researching the seventy-year legacy of Peanuts, is that one can mark the moments when the imaginative world expanded as a result of other creative minds interacting with it. When a teacher prompted Schulz to introduce Franklin (the first black Peanuts character) in 1968. When, in 1979, the educational filmstrips created for elementary schools introduced Dolores (the first Latina Peanuts character). In 2016, when an Off-Broadway revival of You’re A Good Man, Charlie Brown cast a racially diverse group of actors as the Peanuts gang. Or, even more recently, when the Apple ipad program, Procreate, added a feature that allows anybody to animate themselves as a Peanuts character.

Words like diversity, inclusion, and representation are at the forefront of long over-due conversations currently happening in the American theatre/film/entertainment industry. The history of Peanuts is just one small example of why these conversations are so urgent and so exciting. The genius of Charles Schulz created an iconic world, but diversity didn’t start to happen until there were multiple artists playing inside that world. The Peanuts world is richer because of this and, hopefully, it will expand even more in the years to come. When multiple voices can bring multiple perspectives, then a story gains a new depth. When jazz blends with show tunes and gets layered on top of classical piano, then the soundtrack for the story gains a new vibrancy.

True diversity has to include more than just optics. It requires a multiplicity of experiences coming together to reflect a world that is fascinating, funny, complicated, complex and, frankly, just BIGGER than any single perspective can convey. That’s a world that we can all identify with because it’s the world we all live in; both universally recognizable and continually surprising. That’s the Peanuts world we invite you into today. Come play with us!

TALKBACK
Join us for this performance for a short talk-back with members of the cast to learn more about the behind-the-scenes world. Learn more »